Anyway, anyone who logs a find today on geocaching.com, gets a 12-12-12 souvenir.  I didn’t take pictures or video, it was dark, and I knew they wouldn’t turn out good.  I found it after work this morning.

Well, tomorrow is a big day.  It’s 12-12-12.  This date will only come around once in our lifetimes. So, if you’re a geocacher, it’s a day that needs a cache find.  You will even get a special souvenir from geocaching.com.

Because of my work schedule, I will probably get one after work tomorrow morning.  There is a local event, 12/12/12 World Peace, but I won’t be able to attend.  I will be working.

I will be reporting back to share if I actually find a cache tomorrw.

Disclaimer: I am typing this on my, so if this post gets screwed up for some reason, I’ll blame it on that.

If you have been following me, I have been talking a lot lately about hiding geocaches.  I went out again to Mohawk Park to hide another one yesterday.  While Driving up to the spot where I planned on parking, there was a bicycle race.  not just any bike race, but a cyclo-cross race.  It was pretty cool to watch.  So, instead of hiding the cache right away, I stayed and watched it for a while.  I was meeting my parents for lunch, so I had to leave after a while.  But, after eating, I headed back out.  I just walked through this time, and walked to hide my cache.  I only walked around two miles all together, so it wasn’t that far.  Visit my Flickr Page for pictures I took.

The other day, I was looking at Google Earth to find some other places to hide.  I found something round that looked like it was made of concrete.  I wanted to hide it there.  So I this is where I walked to.  Unfortunately, it was inside a fence, so I couldn’t actually get to it.  But I could see it.  It looked to me like some kind of holding tank, like for water.  Here is a picture from Google Maps… 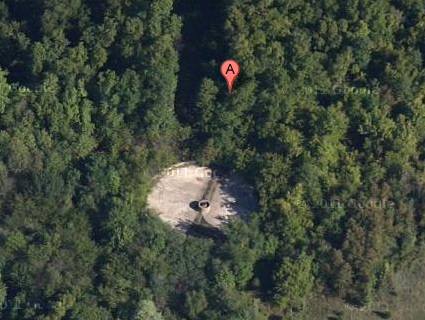 The red A bubble is where I hid the cache.

On the way out of the woods, I noticed a tree stand.  I guess there has been someone hunting out there.  So, today, I told someone at Oxley about it.  In Mohawk, it’s illegal to hunt in the park.  For one thing, it’s in the city limit’s, another thing, it’s real close to the nature center.  So one of the naturalist wanted me to show him where it was.  I took him, and he said someone would take it down.  He also told me they had already taken three down, and a deer feeder.  I had a friend on facebook tell me I shouldn’t have told anyone.  He said that he would be mad if his $300 tree stand was gone.  I told him, the idiot shouldn’t be hunting illegally.  What would you have done.  I don’t hunt, but I see nothing wrong with it, if it’s not at an illegal place.

Anyway, with all that said, my cache was published today.  I named it, What is this?  Hopefully someone can tell me what it is.

I had a pretty busy Sunday and Monday.  Saturday all I did was watch football all day.

Thanks for visiting my blog!!

I enjoy looking at everyone else’s blog posts, so I thought I would try it myself.

Numbers…on the side of an airport hanger.

Bracelet…last minute picture of my arm.

This is the vlog that I uploaded titled “Snakes!!!”

This was actually the first video I shot.  It was with my phone, so it wasn’t as good as my second video, that was uploaded first.  I wanted to upload this one because of the snakes in it.  I thought it would be a good one to share.